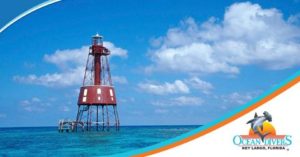 The Carysfort Lighthouse marks the main body of the four mile long Carysfort Reef system. The lighthouse is the oldest functioning lighthouse of its type in the United States. It’s an impressive 112 foot tall structure constructed in 1852.

Carysfort Reef is named for one of its earliest victims, the twenty-eight gun frigate HMS Carysford, which ran aground in 1770. Since that time, the reef has claimed many other ships, which is why this reef is home to the oldest reef lighthouse. Thirteen mooring buoys surround the lighthouse, each marking a beautiful dive spot.

The lighthouse lies six miles off of Key Largo. The shallow reefs surrounding the base of the lighthouse prohibit a close approach by boat. Snorkeling near and around the lighthouse is fantastic with good visiblity, magnificent coral and plenty of fish.

Carysfort Reef is one of the best developed reef systems in the Keys, and contains a wide variety of reef features including well-developed stands of elkhorn coral. Reef development is enhanced by the water quality, temperature, and salinities of the Gulf Stream, which sweeps close to the seaward edge of the reef.

Located ENE of the tower is “Carysfort Trench” (a.k.a., “Caryfort Wall”), a beautiful wall of Staghorn, Brain, and Sheet corals. The wall drops 65-80 feet to a sandy bottom. Five cannons from the 1800s rest in 15 feet of water approximately 1/2 mile to the north of the tower. And two large anchors thought to be from an 1800s frigate rest in 30-40 feet of water four hundred yards NNW of the tower.

Carysfort/South Carysfort Reef is accessible from the Ocean Reef community and from Card Sound through Angelfish Creek.