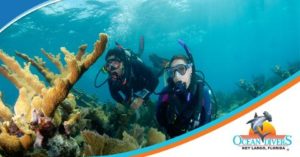 Elbow Reef is a popular dive spot because of its beautiful reefs that have grown up around some very old shipwrecks. The Gulf Stream passes closer to Elbow than many other Key Largo reefs which means in exchange for a bit of current, the water on Elbow is usually clear blue. The area is sometimes called “wreck reef” because of the many ship remnants that have been found at this spot. Some of the wrecks have been down for over 100 years and have fostered a great deal of coral growth. A large variety of sea creatures inhabit Elbow.

Elbow is marked by a 36-foot light tower. On the east-northeast side of the tower lies the shipwreck, City of Washington, which is the most intact ship in The Elbow and went aground in 1911. This is a great spot for snorkeling. Mike’s Wreck is also nearby and is in 18 to 25 feet of water. The “Civil War Wreck” is close to the tower and is a favorite spot of photographers. The wreck is nearly disintegrated except for piles of timber with bronze fastening pins. The area is small but home to lots of colorful fish and invertebrates. Tonawanda, a 300-foot long steam freighter sank in 1866 and lies in 20 to 30 feet.

Another great feature to look for is a 25 to 35 foot anchor chain in 25 feet of water and a concrete mooring block. A ship carrying train wheels sank on the reef and a train wheel, as well as part of the wreck, can be seen 20 to 30 feet down.

There are many coral fingers in this spur-and-groove formation. There are also ledges for exploration which shelter large amounts of marine life. Expect to see beautiful elkhorn and schools of snapper, porkfish, goatfish, angelfish, and butterfly fish. Hawksbill and loggerhead turtles are often spotted in the 20-35 foot range throughout the Elbow.

The deepest portion of the reef is the southern section which is marked by a buoy. Here the bottom slopes toward a ledge known as “Nelson’s Ledge”. At the ledge the bottom drops more steeply to sandy bottom at 85 feet. Giant barrel sponges, brain and star corals cover the bottom.