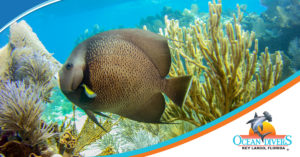 The 315-foot long, 42-foot wide steel-hulled steamship was built in northeast England in 1893 and named for the woman who christened it. Prior to its demise, the ship made frequent transatlantic trips between Europe, the U.S., Caribbean and South American transporting a variety of bulk cargo including cotton, sugar and coal.

On April 4, 1911, the Hannah M. Bell grounded on the shallow reef during a storm known today as Elbow Reef, located about six miles offshore of Key Largo, Fla. The ship was loaded with coal bound for Vera Cruz, Mexico. With the ship’s engine room flooded and holds filled with water, salvagers abandoned their efforts days after grounding, and by May heavy weather had torn the ship apart.

For more than 100 years, the sunken ship was merely known as “Mike’s Wreck,” named after the employee of a local dive shop. In September of 2012, a team of archaeologists finally identified the ship that sunk here in 1911 as the Hannah M. Bell, built in England in 1893. Mike’s Wreck and the Hannah M. Bell’s measurements were virtually identical, as were the reported sinking location and teh actual location of the wreck.

The Hannah M. Bell/Mike’s Wreck is a popular location for underwater photography. Divers report that it is the most colorful of the wrecks on Elbow. There is abundant marine life in the shallow waters. Maximum depth is 25 feet and visibility is usually good because the Elbow Reef juts into the Gulf Stream a bit. Beautiful specimens of elkhorn, brain and star coral are often covered with tiny fish. Sea fans grow from a portion of the wreck.