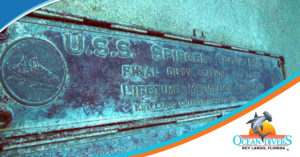 The largest vessel ever intentionally sunk is the USS Spiegel Grove, a 510-foot landing ship dock. To give a better visual understanding of the immensity of this ship, she is roughly equivalent in length to two football fields.

The Spiegel Grove was named after President Rutherford B. Hayes’s Ohio estate and was launched in 1955. She was later cleaned and sunk in 2002 in 130-feet of water near Dixie Shoals in Key Largo. Depths range from 60 to 130 feet with the majority of the ship lying between 80 and 90 feet.

The sinking of the Spiegel Grove is an extraordinary tale. Her sinking was scheduled for Friday, May 17, 2002 at approximately 2:00pm. However, she had a mind of her own and prematurely began to sink, rolled over, and remained upside down for several days with her bow protruding from the water. A salvage team managed to fully sink the vessel three weeks later, but she came to rest on her starboard side rather than keel-up as hoped. Later efforts to right the ship failed despite the best efforts of all involved, including two very determined tugs. Then three years later, much to the surprise of the entire diving community, Hurricane Dennis righted the 510-foot ship with seas over 20 feet and a driving current. She now rests keel-up, fully dignified and ready for new adventures!

The Spiegel Grove is the backbone of the artificial reef system that has formed in this area. Algae, sponges and coral mingle with 130 species of fish to create enormous biodiversity in this region. Divers may see Goliath Grouper, barracuda, large jacks, and a large colony of gobies.

Mooring buoys allow divers an easy tie-in and a steady hold. The lines are attached to the ship and allow divers to travel down them until they reach the hull. This is a very popular site. Divers will need multiple dives to become oriented and it may take countless dives for one to be able to experience all that this massive vessel has to offer. This is a great dive for using multi-level diving techniques and offers an incredible opportunity for exploration and excitement.

This is a dive not to be missed. The reef formation that has arisen is impressive and has fostered growth of much pelagic life.