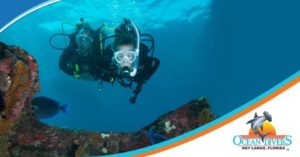 The USS Bibb wreck is a former Coast Guard ship built in 1937. The Bibb served in patrols and as a convoy escort during World War II. She took part in the invasion of Okinawa and was in service in Vietnam. The 327-foot vessel had a beam of 41 feet and drew 13 feet of water. The ship is in pristine condition.

In 1987, the Bibb and another cutter, the Duane, were stripped and prepared for sinking. The doors above the main deck were removed, but the hull was sealed. The Bibb rests on her starboard side in 130 feet of water. The port railing can be reached at 95 feet. Penetration is not recommend as there are many possible entanglements and obstructions, and often extremely stong currents.

The Bibb is close enough to the Gulfstream to have incredible visibiility and some very large marine life. Sharks and Goliath Grouper are routinely spotted here, as are hordes of smaller fishes and barracudas.

For the advanced wreck diver, the Bibb is a dive not to be missed!