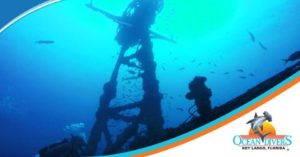 The USCG Duane is a 329-foot Coast Guard cutter that was decommissioned on August 1st, 1985, as the oldest active U.S. military vessel. The ship was intentionally sunk on November 27, 1987, to create an artificial reef. This ship was sunk deep down to ensure that it would not conflict with navigation in the area. The Duane lies outside of the reef line and can have a ripping current. Because of its deep depth and strong currents this is a dive for advanced SCUBA divers with wreck-diving experience.

Many consider the USCG Duane to be the perfect wreck dive. Before sinking, the ship’s hatches were opened and the holds pumped full of water to sink the ship. The USCG Duane sits upright on the sandy bottom at 120 feet offering nearly 70 feet of relief. On clear days the outline of the hull can be seen from far above. The crow’s nest and mast become visible just 50-60 feet below the surface. Many decks and rooms were intentionally left open to allow divers room to explore the interior of the cutter. Bring a divelight if you plan to penetrate the interior. The hull structure is completely intact with the original rudders, screws, railings, ladders and ports.

This wreck is even more impressive because the waters are so clear that visibility is often 100 feet. It is closer to the Gulfstream than most wrecks and reefs and some very large fish such as Barracuda, Amberjack, Black Grouper, and Cobia are often spotted swimming around the wreck. In addition to the fish, It is very common to see variety of sharks and rays in the sand patches on and around the wreck.